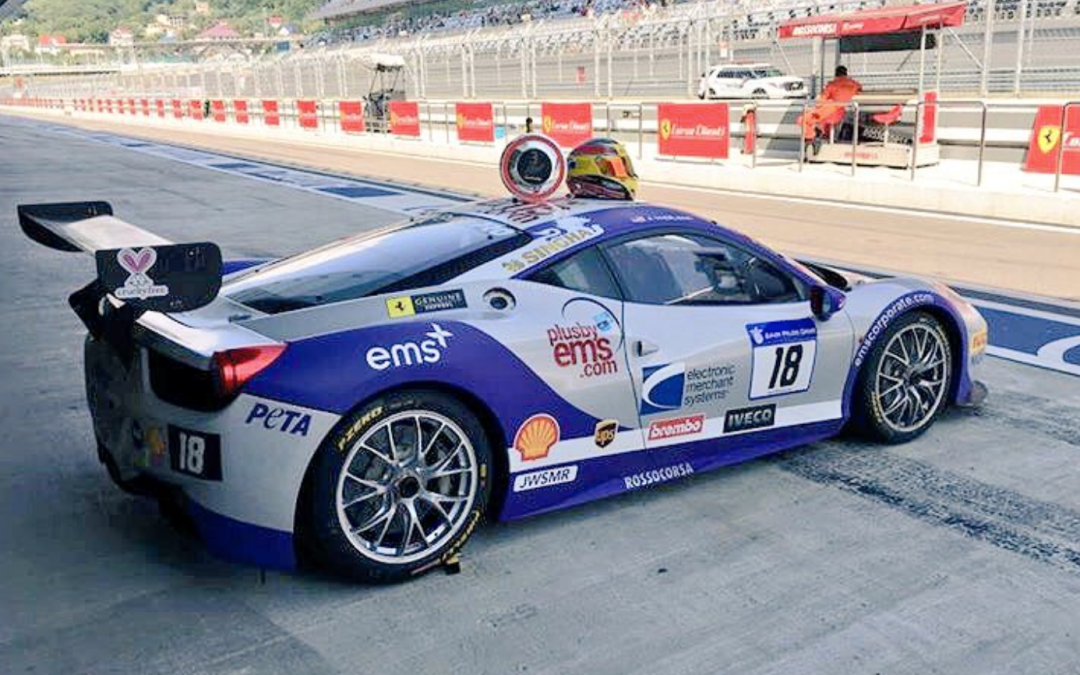 While competing to raise awareness for the Cornerstone of Hope Foundation and PETA Cruelty Free, EMS Race Team traveled to Russia for the Ferrari Racing Days event in Sochi this past weekend. On a track surrounding the site of the 2014 Winter Olympics, driver James Weiland and his team battled some of the best Ferrari Challenge drivers in the world all weekend long. Despite this significant test, EMS would eventually make Russia the fourth country they’d earn a podium finish in this season with a top-three performance on Sunday.

“Competing in Russia was an unbelievable experience for us,” Weiland said after the race. “I remember watching the Olympics in Sochi only a couple years ago and to be here now—racing on a beautiful course against some of the best in the world—it was truly an amazing weekend. It was also a great opportunity to spread the word about Cornerstone of Hope and PETA Cruelty Free with so many of the supportive fans here in Russia which we are always honored to do.”

To help Weiland fly the banner for those causes was his new car, Nicky. The ems+ Ferrari 458 Challenge EVO trimmed in purple didn’t take long to adjust to the competition in Sochi, either. After qualifying fifth in Race 1, Nicky quickly jumped out to the third position before eventually finishing where she started in fifth. But on Sunday, Nicky came roaring back in Race 2 while lifting Weiland and the Boardwalk Ferrari crew onto the podium with a third-place finish in the Trofeo Pirelli AM class.

Great effort by our team to help put us in a position for a podium finish in Sochi, Russia today! pic.twitter.com/AxuiGjgwDU

“I didn’t actually realize it until someone told me after the race, but this was the fourth different country our team was able to earn a podium finish in this season,” Weiland added. “That speaks to the dedication of our crew and our coaches, constantly adjusting to new environments, new tracks, and new challenges on a regular basis. The Boardwalk Ferrari team is a great group to be competing with, and it’s been a special journey for us so far this season.”

According to the Sochi Autodrom—the site of the first-ever Ferrari Racing Days event in Russia—over 20,000 fans turned out between Saturday and Sunday to take part in the festivities. That passion could be felt throughout the weekend, adding a positive energy to an already exceptional environment for racing. On Sunday, Weiland tapped into that enthusiasm for a third-in-class finish that was also the best of any other American in the race. Sam Smeeth (Stratstone Ferrari) and Vladimir Atoev (Motor Service) finished one-two on Sunday in the Trofeo Pirelli AM group, with EMS rounding out the top three during only the second race of Nicky’s young career.

For more behind-the-scenes coverage of the Ferrari Challenge in Sochi, Russia follow @emsRaceTeam on Twitter, Facebook and Instagram. Also, be sure to visit EMS Race Team’s Vimeo Page for on-track action from race weekend like the in-car footage from Sochi featured above.