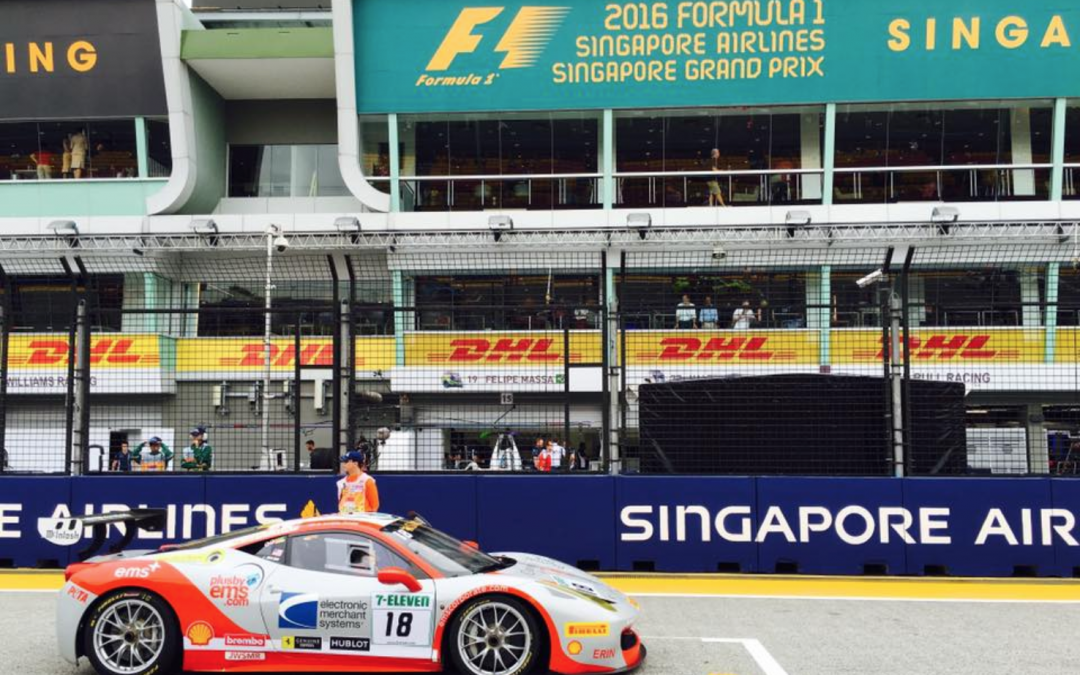 Legendary driver Dale Earnhardt once described racing by saying, “It’s a never ending battle of making your cars better and also trying to be better yourself.” Despite the success that EMS Race Team driver James Weiland and his team from Boardwalk Ferrari have achieved this season, that lesson of always trying to improve remains at the core of everything they do on the Ferrari Challenge Circuit. Their trip to Singapore to compete at the Marina Bay Street Circuit this past weekend served as another chapter in that never ending learning experience.

“We had the opportunity to compete on a tremendous track, in a beautiful country, during F1 weekend,” Weiland said following trip. “Along the way, we also had the chance to spread the word about two causes that mean a lot to us—PETA Cruelty Free and Cornerstone of Hope. The results were certainly not what we hoped for, but we understand that this is a process and you have to take the good with the bad. We’ll learn from the experience and get back on the track at Lime Rock in a few days looking for better results.”

During Race 1, EMS Race Team got a good jump at the start after earning pole position in qualifying, but were eventually backed up with nowhere to go on the crowded Marina Bay track at the first turn. After a competitor’s car broke down, causing other drivers to swerve around him, contact broke the radiator of Weiland’s EMS+ Ferrari Challenge 458 EVO, Erin, ending their day. Race 2 was even more difficult to digest on Sunday, after a controversial decision robbed Weiland of a first-place finish he initially appeared to earn in the Trofeo Pirelli AM class.

“Fortunately, it has been a while since we had a rough race weekend,” Weiland joked. “But unfortunately, we had a couple clunkers in Singapore. We did some good things on the track, tried our best to battle through adversity, but the breaks didn’t go our way this time. Hopefully next time they do. If nothing else, weekend’s like this really make you appreciate how special those podium finishes are. Hopefully our team can get back up there soon.”

Weiland was able to guide Erin to first position in qualifying for Race 1 before contact ended their race early. On Sunday, he received contact again as evidenced by race video and pictures of Erin during the race. In Race 2, Weiland took the checkered flag for the win despite starting in 6th place after an excellent drive. But the FIA stewards ruled that EMS gained a position reentering after being punted off track at the start and assessed a 10-second penalty. That took Weiland and Erin from 1st to 4th place. The controversial call was dismissed quickly, however, as Weiland and company had nothing but great things to say about the event in Singapore. Next up is a trip to Connecticut as that never ending mission to improve continues.

For pictures and behind-the-scenes coverage of the Ferrari Challenge at Singapore, be sure to follow @emsRaceTeam on Twitter, Facebook and Instagram. Also, be sure to visit EMS Race Team’s Vimeo Page for on-track action following the trip.